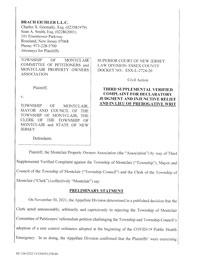 Read a full report at NorthJersey.com

Judges side with Montclair landlords, sending rent control ordinance to a referendum

Opponents of Montclair’s rent control statute have won a decisive round in a game of legal pingpong that started after the Township Council approved its first-ever rent control ordinance in April 2020.

In a decision handed down Tuesday morning, an appeals panel in Trenton sided with a landlord group that argued that the Montclair town clerk improperly rejected signatures on a petition.The landlords’ petition sought to force the ordinance to be put to a referendum.

Tuesday’s decision essentially invalidates the ordinance unless it is approved by a majority of Montclair voters. Though the town has put a rent control measure on the ballot several times in the past, it has never passed.

The ordinance limits annual rent increases to 4.25%, or 2.5% for seniors; two- and three-family homes are exempt. Per state statute, apartments in new buildings with an affordable housing component are exempt for 30 years.

Toni Martin, co-founder of the Tenants Organization of Montclair, said in an emailed comment, “This very long, very twisty-turny journey will go on a little longer.

“There will be a vote of the people of Montclair, which the Tenants Organization of Montclair fully believes will finally bring protection to renters, moderate limits on rent hikes, and some stability to our town.”

Ron Simoncini, director of the Montclair Property Owners Association, said in an email, “If its past obstruction and politicking in this matter is any indication, we expect that Montclair officials will continue their attempts to disrupt the referendum process. But the writing is on the wall: this matter is headed for the ballot and the voters will have a chance to decide.”

THE QUESTION COMING TO THE BALLOT – VOICE YOUR VOTE:

“Should Ordinance 0-25-05 ‘Establishing Rent Control in the Township of Montclair’ be repealed?”

WHY YOU SHOULD VOTE YES TO REPEAL

Support A Referendum On Rent Control in Montclair Because:

Council should be compelled to hear all Montclair Voters on rent control.

BRINGING THE POWER OF THE VOTE BACK TO THE PEOPLE OF MONTCLAIR: IMPORTANT INFORMATION FROM YOUR NEIGHBORS

Concerned Montclair residents formed a Committee and have successfully gained enough signatures on their petition regarding the repeal of the Town Council’s Rent Control Ordinance. It will now go before the public as a referendum vote.

You may have learned about this effort in the local media – many of these published statements written by local officials and their representatives are simply false.

We would like to directly address these statements so that you are rightfully informed and understand the whole truth.

This effort is vitally important to all township residents. Its only purpose was to place a referendum on the ballot in an upcoming election so you, the Montclair Voter, have the power to choose the future path of this great community.

Because the petition has been certified, you now have that power back once again.

During the petition process, we would have preferred to speak with you at your doorstep or on the street corner to have informative and cordial conversation. But due to the unforeseen circumstances surrounding the Covid-19 Pandemic and Governor Murphy’s Emergency Orders – it prevented from us doing so.

Realizing the issue of Rent Control could forever change the future of Montclair, we came together to seek your support in the form of an online petition. A petition that would give voters back their constitutional right to decide on Rent Control – instead of placing it in the hands of an autocratic City Council that has pushed forward an agenda of a few on the many using the Covid-19 pandemic as cover.

It is most important to address the inaccurate information circulated by the Mayor about the effort itself.  Here is the one simple truth: the certification of this petition simply places a question on the ballot deciding if Montclair should have a rent control ordinance. It will give every single voter – not just self-interested politicians – the chance to express their will and exercise their constitutional right.

Now that it is up for a public vote, Montclair gets to decide the matter on their own. This is about putting the future of your town into your hands.

This is called the power of referendum.  It is a right protected by our laws and the New Jersey State Constitution.

We cannot stress it enough: we need to get all voters in Montclair together and involved so that each of us can be heard by City Hall.

We are standing firm to make our collective voices heard on this issue. We are more than disappointed that our elected officials were determined to deny you the right to vote.

YOU NOW HAVE THAT RIGHT BACK.

Perhaps they are fearful you will learn things about rent control. Like the hundreds of thousands of dollars in administrative costs associated with the ordinance and how it will raise taxes on single family properties.

Perhaps they are fearful you will learn that most towns and voters in New Jersey reject rent controls because they do not create additional housing. In reality – rent control depresses the quality of existing rental properties wherever it is implemented.

Now, your voice will be heard at the ballot box.

OPEN LETTER FROM MONTCLAIR PROPERTY OWNERS TO THE VOTERS

NOTE: Since this letter’s first publication, the petition has been CERTIFIED and the Referendum will now be going to the ballot.

MONTCLAIR, N.J., September 24, 2020—The Montclair Property Owners Association [MPOA] filed its petition with the Town Clerk to put the Council’s Rent Control Ordinance up for a referendum vote.

There has been much misinformation and misrepresentation of the facts spread by the Council surrounding this effort regarding the circumstances and motivation behind it.

MPOA would like to address your concerns and firmly state our position on the issue:

Judge Gives Montclair 20 Days To Nix Rent Control, Or Send It To Voters